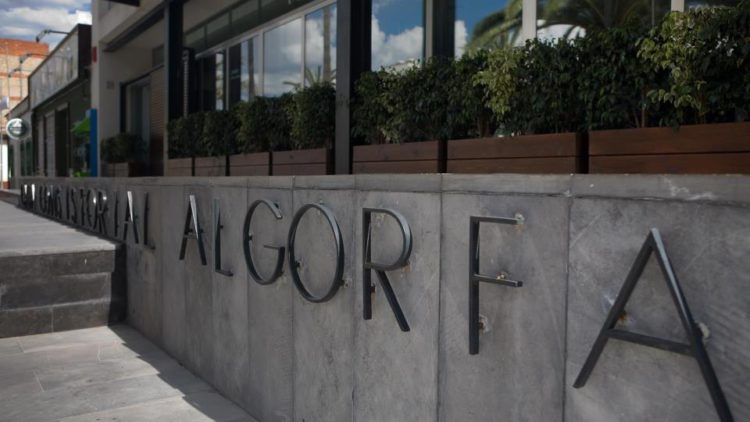 The municipality of Algorfa has its origin in the privilege granted in 1328 by Alfonso IV to the natives of the kingdom of Valencia, by which it granted the minor jurisdiction, also called alfonsina, to all those owners of rustic estates by the fact to constitute in them At least fifteen houses and settle to an equal number of families. This privilege was in force until the abolition of the fueros of the Kingdom of Valencia by the Decree of New Plant, dictated after War of Succession in 1714 with the proclamation of Felipe V like king of Spain.

On August 16, 1761, the owner of the lordship of Benejúzar, Juan Rosell and Roda, in his testament instituted mayorazgo on the hacienda called “de Algorfa” and other goods in favor of his nephew Francisco Ruiz-Dávalos y Rosell and within his Direct descendants, in their children Antonio and Josefa. The latter, with her husband Ignacio Perez de Sarrió, lord of Formentera, would obtain the Alfonsina jurisdiction for the estate of Algorfa, for which and fulfilling the requirement established in the privilege of 1328, ordered to build 16 houses in said property.

The year after the mayorazgo was created, he obtained the title of marquis of Algorfa, with the previous viscondado of Arneva, by Real Despacho of 3 of March of 1762.

By Real Provision given in the city of Valencia the 26 of June of 1790, Carlos IV, granted the spouses Ignacio Perez de Sarrió and Isabel Ruiz Dávalos, marquises of Algorfa, the Alfonsino privilege on the neighbors of the place recently founded in the inheritance of Algorfa, property of the expressed marquise.

As stated in the written documents relating to the town of Algorfa and its history, in the year 2015 is celebrated the 225th anniversary of its constitution as a neighborhood unit with administrative and political entity. In other words, it became, in 1790, what we now understand as a municipality.

“… I beg to assert that, once these documents have been presented and exhived, it will be useful to declare that the said mixed jurisdiction, called Alfonsina, has been relinquished in my Party, and consequently to have the corresponding Excutorial Dispatch dispatched, so that it may exercise the aforementioned jurisdiction in The mode and form prescribed by the Laws in the new place of Algorfa. ”

It was June 26, 1790 and Algorfa was born under a Royal Provision granted by Charles IV to the Marquis of the same name.

It is true that thanks to the great work of Father Furgús, archaeologist and Jesuit, it has been established that Algorfa had its first settlers in ancient times, the Neolithic in particular, III Milenio AC, but the first modern reference of this population we place in that Year of century XVIII.

This was the birth of this new population whose beginnings were not easy, as the neighboring towns of Almoradí and Rojales put many obstacles to the municipal independence of the newly created place of Algorfa, which was the subject of a long struggle between the Marquises de Algorfa and the bordering municipalities.