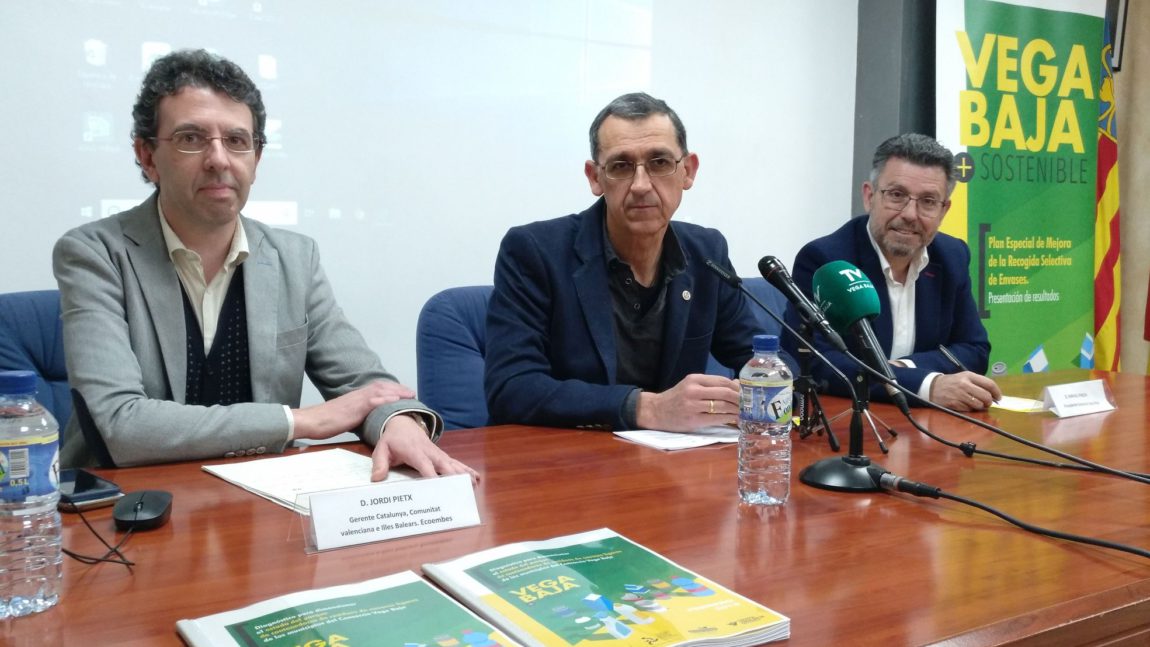 The municipality of Orihuela wins the prize of ‘The challenge of recycling’ and will allocate the 6,000 euros obtained to the non-profit entity Cáritas Diocesana

The Consorcio Vega Baja Sostenible, Generalitat Valenciana and Ecoembes, the non-profit environmental organization that coordinates recycling in Spain, presented this morning the results of the Special Plan for Collection of Containers to the municipalities of Vega Baja. This plan, which began in July 2018, was aimed at improving containerization, increasing the selective collection of containers and making a diagnosis of collection service in the municipalities.

The Virgen de Cox Cultural Center has hosted this institutional presentation, in which the prize of ‘The challenge of recycling’ has also been awarded. The event was attended by the president of the Vega Baja Sustainable Consortium, Manuel Pineda, by Ecoembes the manager of Catalonia, Comunitat Valenciana and Illes Balears, Jordi Pietx, and the specialist in the Valencian Community, Sonia Poveda, the general director of Environmental Quality and Climate Change of the Generalitat Valenciana, Joan Piquer and the technician of the Department of Environment of Imedes, Eva Checa. The talk has also been attended by municipal representatives of the region, councilors and technicians.

The results of the special plan have been shelled by the technician of the department of environment and territory of Imedes, Eva Checa. During the presentation the diagnoses have been delivered to the representatives of the municipalities, and new increments of containers of containers in specific locations of each locality have been proposed. During the presentation the global data were given regarding the Consortium and then the town councils that have participated in this plan will have their specific data.

On the other hand, the winning municipality of ‘The challenge of recycling’ held last spring has been the municipality of Orihuela. The prize consists of a cash prize of 6,000 euros that Orihuela will allocate to the non-profit entity based in the town, Cáritas Diocesana.

The person in charge of receiving the award, from the hands of the general manager and the manager of Ecoembes, has been the councilor of Street Cleaning and Urban Cleaning, Dámaso Aparicio with the Reverend José Antonio Martínez García, archpriest of Orihuela and parish priest of the church of Santiago and the secretary general of Cáritas Diocesana de Orihuela, Francisco Javier Ruvira Guilabert.

During the months of April and May, the campaign visited over 20 municipalities of the Vega Baja with the objective of encouraging citizens to recycle and increase their contribution to the yellow container, separating the light and cardboard containers from the rest of the waste correctly. The recycling van rolled for 25 days through the Vega Baja reaching more than 337,000 citizens. The challenge interacted with more than 18,000 people who participated directly in the different activities that were proposed. In addition, there were more than 40 awareness-raising talks about the recycling of containers and their importance, in centers or headquarters of groups of each population, neighborhood associations, consumers, and so on. and in the places of greater affluence of citizens of the municipality in which almost 4,000 people participated. Likewise, 61,000 units of merchandising were distributed among bread bags, pens, pencils, paints and paper mills.