Generalitat, Vega Baja Sostenible and Ecoembes start the campaign ‘The Recycling Challenge’ in the region 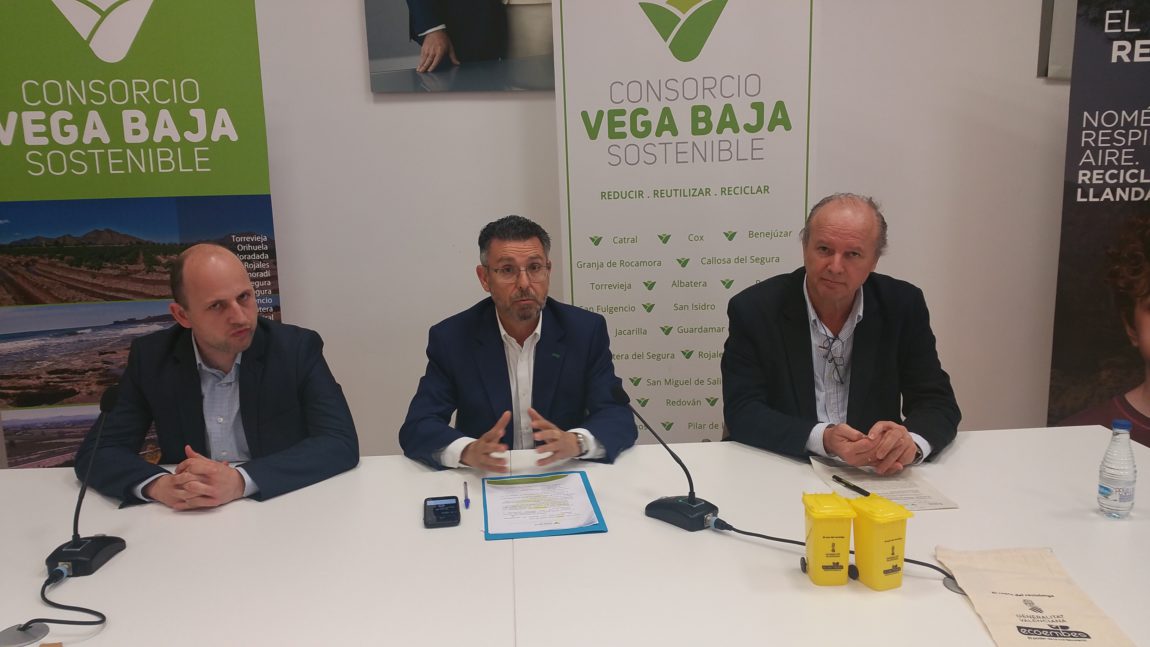 Today has taken place in the town of Rojales the presentation of the new public awareness campaign to promote the proper separation and recycling of plastic containers, cans and bricks (yellow container) and paper and cardboard (blue container) in the region of the Vega Baja, which will be developed from today until June 15 with the title ‘The Challenge of Recycling’. The president of the Vega Baja Sustainable Consortium, Manuel Pineda, attended the ceremony; the General Director of Climate Change and Environmental Quality of the Generalitat, Joan Piquer; and the Marketing Manager of Ecoembes, Juan Alonso de Velasco.

The campaign will be developed in 19 of the 27 municipalities integrated in the Vega Baja Sustainable Consortium. It is a new action of citizen awareness on the importance of separating and recycling correctly the plastic containers, cans and briks, as well as paper and cardboard. The action, framed in the Plan of Action of Packaging of the Comunitat Valenciana for the period 2016-2020, is promoted by the Ministry of Agriculture, Environment, Climate Change and Rural Development and Ecoembes, the environmental organization that promotes the circular economy Through the recycling of packaging in Spain, it seeks to raise awareness among the population regarding recycling, in collaboration with the Vega Baja Sustainable Consortium.

To do this, the different municipalities that are part of the Vega Baja Consortium will participate in a challenge in which the winner will be the one that increases its contribution in the yellow and blue containers and kilos will recover. The prize of this challenge is an economic contribution for a non-profit social entity of the winning town.

The president of the Vega Baja Sustainable Consortium, Manuel Pineda, thanked both Ecoembes and the Generalitat Valenciana for the work carried out in recent months “so that the Vega Baja has a project of these characteristics and with this breadth of vision”. This project is also one more step within the objectives set by the Consortium and that “the Vega Baja has several transfer, treatment and a network of fixed and mobile ecoparks according to the XXI century”.

The campaign will include information and entertainment actions aimed at citizens of all ages. The vehicle identifying the campaign, called ‘the recycling van’, will visit each location with an animation team and another training team that will hold informative talks, awareness and explanation about the vital importance of recycling, in those centers or headquarters of groups chosen in each population, neighborhood associations, consumers, etc. To all this, entertainment and environmental education actions will be added, which will take place in the places with the greatest influx of citizens of the municipality.

It is sought that such actions are permeable to the organizations, traditions and culture of the geographical area on which it is acting, making them participants and co-promoters of the initiative to institutions, organizations, clubs, associations, etc. from each locality, in an attempt to reach as many neighbors and households as possible in order to multiply awareness and the amount of waste recovered for recycling.