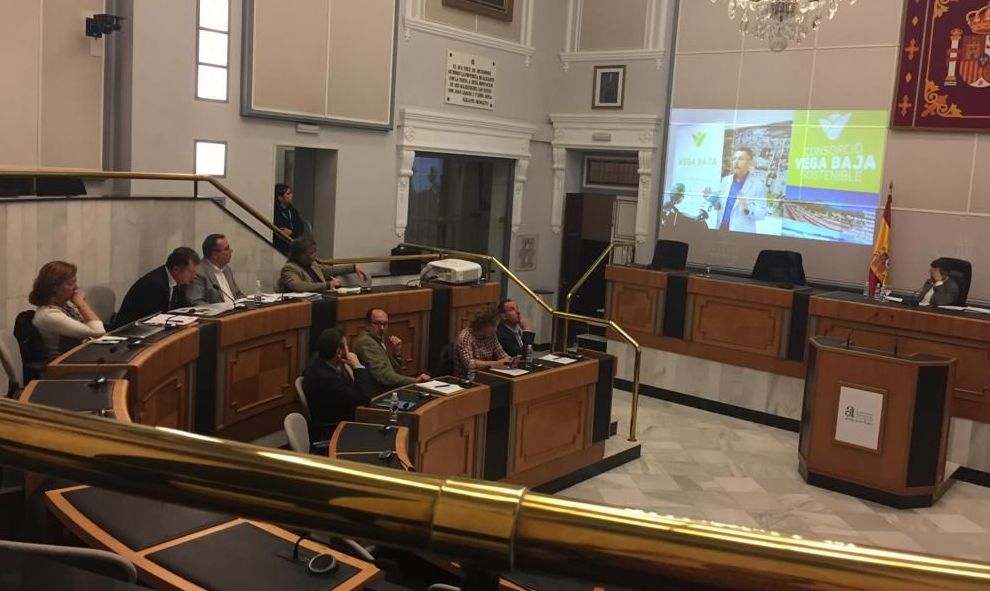 The Plenary of the Vega Baja Sustainable Consortium has approved today both the staff of the agency for 2018 and the budget, amounting to a total of 621,115.61 euros. The economic document includes, on the one hand, that 160,115.61 Euros will be allocated to personnel expenses. 1,500 euros will also be invested in the implementation and start-up of a technological platform for the registration of documents and records.

In terms of current assets and services, a consignment of studies and technical work of 458,080 euros has been recorded. This item includes 15,000 euros for the drafting of feasibility studies and exploitation preliminary draft, as well as specifications, in case of indirect management of a transfer plant. On the other hand, for the final solution of these facilities, an expense of 72,500 euros has been envisaged to order the mandatory technical documents.

The services chapter also includes a budget of 153,000 euros, which is divided on the one hand in the communication plan promoted last year by the Consortium with 35,000 euros, although in the previous year it could not be developed; a public awareness campaign at street level, in which many of the municipalities of the region will be taken a pedagogical project with which the residents of the region can learn to collect, recycle and recover, and in which the Consortium foresees invest around 60,000 euros, similar to what other provincial consortiums develop. The county entity also intends to hold in each town a congress a year on recycling, cleaning and circular economy in which it will invest 6,000 euros, taking advantage of the network of local audiences in the Vega Baja; Regarding this issue, said forum foresees the programming of panels of experts and civic activities in parallel that will take place in the host municipality of said meeting, as already happens in other consortia of the Region.

The acquisition of the mobile ecopark and its implementation will also be reinforced with functional equipment and two people assigned to its operation that will involve an investment of 132,000 euros.

Other expenses contemplated by the budget are 36,900 euros to pay compensation for assistance of the members of the Consortium to the boards of government and commissions, as well as 200 euros to enable the necessary credits for the acquisition of an action of the Vaersa company or symbolic items with which it will be possible to request funding from the European Regional Development Fund (EU) for investments in ecoparks and the Generalitat Valenciana for the construction of a transfer plant.

Regarding the income chapter, the Vega Baja Sostenible Consortium will receive 147,766.40 euros from the Generalitat Valenciana, 88,659.84 euros from the Provincial Council of Alicante, 354,639.37 euros from the town halls, and 30,000 euros in interest.

On the other hand, the Plenary has also approved the non-adhesion to the private initiative project promoted by Cespa Gestión de Residuos SA, based on a report from the legal services of the consortium entity itself. The president, Manuel Pineda, has raised this proposal to plenary after a report from the secretary since the project does not follow the current regulations and was presented under the Waste Law, when the legal department understands that this initiative must follow the Contracts Law of the Public sector.

The plenary session has reported several writings in relation to selective collection and the fifth container, the one used for organic matter, since “we will have to prepare because by 2020 European regulations urge us to implement these types of containers “, Said the president, Manuel Pineda. It has also been reported the ecoembes data in relation to the separate collection of light packaging and paperboard in 2015 and “we are below the average of the Valencian Community”, explained Pineda.

Other proposals that have gone to Plenary have been the collection of a monthly assistance when different calls coincide in the same month, waiving the rest, and the “amendment in the bylaws so that personnel belonging to any other consortium can work in this, since right now they only can do it workers of the Delegation “, has qualified Pineda.

The president of Consorcio Vega Baja Sostenible, Manuel Pineda, has also appeared today in an extraordinary session “to inform in a transparent manner all the municipalities and members of the proposals made to the media about the consortium and that have not been subject to debate in the collegiate bodies “, as detailed in the agenda item. Pineda has apologized in the first place, “for the mistake of not inviting all the municipal representatives to the press conferences that are convened.”

Pineda has given way to the full reproduction of the press conference on October 23 that the Consortium held in the City of Rafal. After the viewing of the video and the question time the president has responded to the local spokesmen and has made a brief review of the Zonal Waste Plan since 2006, the year in which the statutes were approved and the Consortium was formed. Pineda has stated that “for a decade the president of the Consortium has been a member of the PP, but that the zonal plan XVII continues without any installation, the second region with the greatest generation of urban waste throughout the Region”. In this regard, the president recalled that most of those responsible for that decade of previous administration are “prosecuted for unpleasant issues that we all know.”

The mayor of Rafal has also stressed that the judicialization of the contract for the management of waste in the region “brings us to today, without a final judgment in his favor regarding the termination of the contract initially practiced by the Consortium, against its former concessionaire, UTE Cespa-Ortiz, this entity is tied hand and foot. ”

The president has stressed that they have launched management project as a temporary solution and through public initiative, despite “all the administrative difficulties involved and in that endeavor we are,” he concluded.