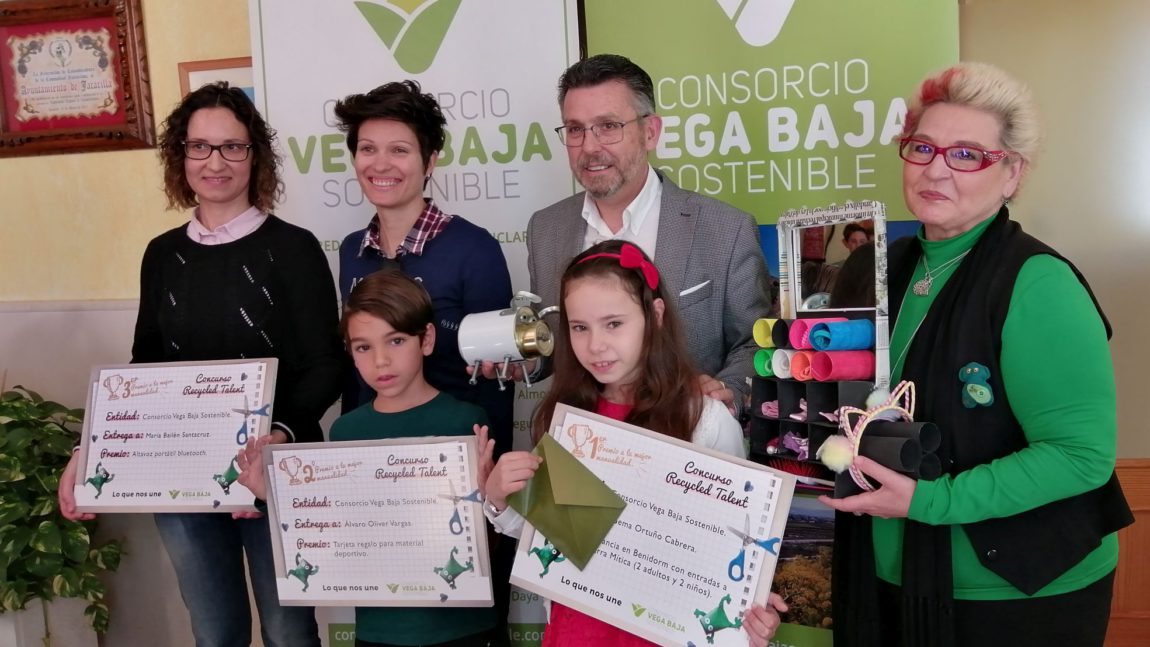 The Consorcio Vega Baja Sostenible has delivered this morning in the town of Jacarilla the prizes of the first children’s contest on recycling ‘Recycled Talent’. A contest that consisted of carrying out a project, individually, from recycled materials.

The first prize, consisting of a stay at the Terra Mírica park in Benidorm with overnight accommodation and breakfast for two adults and two children, was for the fourth-year student of CEIP Virgen de Belén de Jacarilla, Gema Ortuño Cabrera. The project has consisted of a coquette-chic made with shoe boxes, rolls of toilet paper and rubber bands.

Also the second prize, whose content is a gift card of 125 euros for sports equipment, has been for the student Álvaro Oliver Vargas of the CEIP San José de Calasanz de Bigastro. The scholar has made a piggy bank from screws, washers, and so on.

Finally, the third prize of a bluetooth speaker valued at 70 euros was for the student María Bailén Santacruz, of CEIP Pascual Andreu de Almoradí. The project has been made with reused materials such as coffee capsules, briks caps, medicine blister or egg cartons.

The works of the winners can be seen on the website of the Vega Baja Sustainable Consortium through this link: www.consorciovegabajasostenible.com/concurso-recycled-talent.

The award ceremony has been made by the president of the Consortium, Manuel Pineda; the mayor of Jacarilla, Pilar Díaz and the mayor of Ciudadanos en Almoradí, Almudena Albentosa. For its part, Pineda has said that “the foundation of the contest is to raise awareness and sensitize children and child in recycling and reuse.” The contest has led to the submission of works from almost all municipalities and is an activity in which “parents are also involved, as it is essential that we all recycle and promote habits for this”.

The Vega Baja Sostenible Consortium values ​​this contest positively since a similar one has never been carried out since the institution. In this sense, the contest has been very well received by students who have used all kinds of materials to make the projects. These have gone from dolls to swords, bags, bins, all made with recycled and original materials.

The objective of this contest was, on the one hand, to promote in the environment of the youngest children the recycling and the second life that can be given to the waste that we generate and, on the other hand, to raise awareness and sensitize the students of The importance of recycling in the home.